With just hours before the US election gets underway, the race between Clinton and Trump remains extremely close. Nothing about this election has been predictable, and that is not set to change on polling day. The run up to the election has been the most bitter in the country’s history. The last night of campaigning saw the candidates final attempts to appeal to the so-called ‘swing states’. Trump asked voters in Michigan (a key swing state) whether they wanted to be ‘ruled by a political class’ or whether they wanted to rule themselves. He asked the working class to fight back and promised to break down the walls of the establishment. Clinton, on the other hand, promised that she would build on the progress made by Obama. Obama has appealed for voters not to be persuaded by fear mongering.

The election campaign has revealed large cracks and divisions within US society that will be hard to recover following the result. This post will outline the key features of the election. 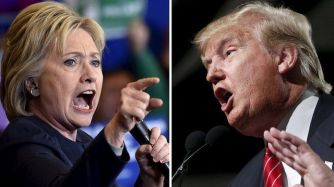 The 45th president of the United States will either be:

How does the election work? 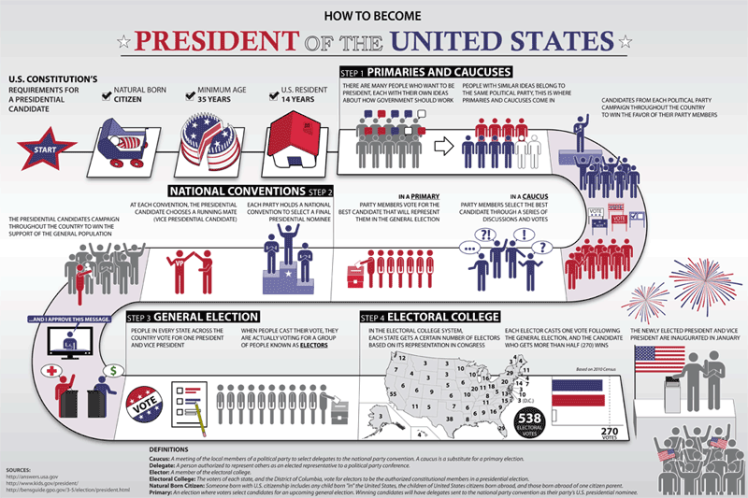 The US election is not decided by a national popular vote, but rather by a state based mechanism. Each state is allocated a number of ‘electoral college’ votes, depending on the size of the population. California has the most electoral votes (55), with Texas coming close behind (34) and New York (31). The ‘winner takes all’ basis means that if a candidate wins, for example California, even by 1 vote = the candidate will take all 55 electoral college votes. The majority of states are politically aligned meaning that the key battleground is a small number of swing states, predominantly the Midwest.

There are a total number of 538 electoral votes in total, corresponding to the 435 Representatives (congressmen and women) and 100 Senators, plus the three elected representatives from the District of Columbia.  270 electoral college votes  are needed to get into the Whitehouse.

Experience: A good or bad thing?

Hillary Clinton on the other hand has a lot of experience.

This election Campaign has seen insults thrown and accusations made on both sides of the aisle. It has been one of the dirtiest campaigns in US history and thus it has not been shy of controversies. These are the main ones that have caught the headlines. 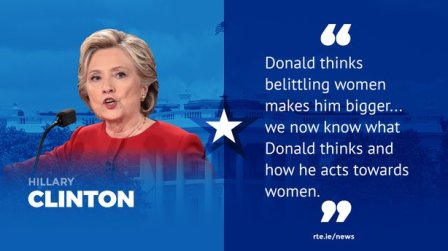 Trump appears to have (just about) survive the accusations of his violations of women which emerged following the release of a tape from 2005 in which he bragged about his ability to conduct and get away with sexual assault. This is not unfamiliar water for Trump, as those who have followed his campaign will be aware; he has constantly uttered misogynistic and offensive tag-lines that have resurfaced and caused him to show indifference to such ‘locker room banter’. The tape alluded to showed footage of Trump claiming that if you were famous you could grab women by the pu**y. This prompted an overwhelming backlash, delving to the heart of feminism. Whilst some suggested that you could not hold this against him as he thought it to be a private conversation, the issue lies in that so many people still hold this view. Whether in private or in public, it is never acceptable to suggest or encourage such behaviour. Trump has shown an overwhelming contempt for women and an underlying lack of understanding of the issues that are at the forefront of women’s rights movements; rape, sexual assault in the workplace, respect. The Economist made a valuable contribution by noting that the comments themselves are less shocking than the indication that they have not affected the polls in a drastic way. 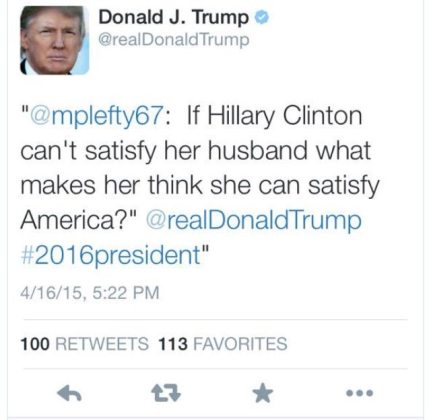 ‘Gone are the days where we question our power or our influence. We are strong. Smart. We know our worth and it doesn’t reside in the size of our bras or our skinny jeans. We heard you when you said we should  “look for another place to work” if we experience workplace sexual harassment. Your non-solution illustrates either your lack of understanding or lack of concern. Or both. Your attitude and ignorance on this is stunning. Your response, pathetic. We see you, and we see someone who’s in over their head.

We watched you interrupt a woman 51 times during a 90 minute debate. While the better qualified, more knowledgeable woman was talking, you attempted to bulldoze right over her. We all know this game. It’s called male privilege. And it doesn’t look good on you, Mr. Trump. It makes you look weak. We see you, and we see a man who is so threatened by a woman speaking that you can’t even bear to let her finish. We are different, us women. We are not a homogenous army of fem-bots. We have different interests, goals and lives. There is more to us than motherhood. Some of us revel in motherhood. Some of us don’t want to have children. And some of us can’t have children. Our status as mothers has nothing to do with our worth… you are tone-deaf to the reality that women face and point to an antiquated attitude. One that keeps women as the caregivers and leaves men out of that equation.

We see the with anger when we read your tweet blaming military sexual assault on the fact that women are in the military. We haven’t forgotten your lurid tweet about Hillary Clinton not being able to “satisfy” her husband. Not only do you not understand women, you seem to have an awful lot of contempt for them. This is not fitting for a man who wants to be President in the 21st Century. Make America Great Again? It’s not-so-coded language for a time gone by. Your “great” America wasn’t so great for women and minorities and gay people. We won’t go back. We won’t be relegated to the kitchen. We won’t be locked into a life where we have no choice over our bodies or whether we have babies. We won’t accept your patronizing response to sexual harassment. We won’t be silenced or demeaned any more. We won’t be ridiculed for our weight or judged by our appearance. We won’t be shamed for owning our sexuality. We have come a long way since your days of when America was “great.”

We have busted our asses to get here and we’re not going back. We are raising strong daughters who fight back against sexist school dress codes. We are raising strong sons who aren’t afraid of their feelings and aren’t afraid of strong girls. We are shutting down catcalling. We are no longer letting ourselves be interrupted and drowned out in the board room. We are shouting about every day sexism. So maybe this isn’t your time, Mr. Trump. Maybe your time has passed. Maybe you would have been more suited to the early 1900’s when women did not yet have the right to vote. When marital rape was still legal. Or the 1950’s when women largely stayed home and produced children and McCarthyism and blacklisting were acceptable. Or perhaps 1930’s Germany would have been a better fit for you. But now? Now is not your time. We’re moving forward. All of us, smart men and women, have had enough of the tired gender roles. We’ve had enough of you and other weak, fearful men trying to stop progress. We see you, Mr. Trump. We see your sexism and your bigotry and your racism. We see right through you’. (extract from ‘ An open letter to Donald Trump from some angry women). 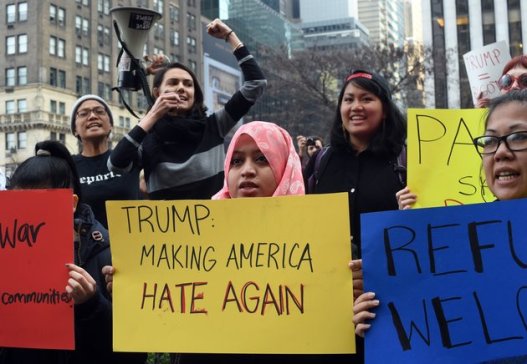 Trump’s outwardly intolerant views towards muslims and immigrants more broadly are not only ridiculous but worrying to say the least. When someone of relative (or perhaps, soon, very real) power says things of intolerance, whether that be religious, sexist, or anything for that matter, it legitimises it in the eyes of the public. It was seen after Brexit where anti-immigration rhetoric in the UK led to racist attacks, and it will be seen in the US if the President of the United States goes around banning whole religions from the country.

Clinton and her private emails:

Hillary Clinton has faced a series of revelations of her use of a private email while US secretary of state.

The election will take place across 6 times zones and will finish at 4am UK time on Wednesday 9th November. There are almost as many eligible voters among the 18-to-35 set as there are among 52-to-70-year-olds. However political apathy means that they are less likely to vote than their dutiful parents and grandparents, and they are even less likely to identify with a political party. Polls conducted in the run up to the election suggest that millennials feel particularly unrepresented by the options presented to them, particularly Trump who rejects the liberal globalised world in which they were born. The Guardian quoted a 19-year-old who stated ‘It’s super crazy. I don’t want to be part of it. I don’t like anything about it. I don’t like either candidate’.  This election is the most consequential race for the Whitehouse in a generation. Clinton said she ‘regret(s) deeply how angry the tone of the campaign became’ but that voters need to turnout in order to ‘bridge the divide in our country’. Trump voiced equal confidence, stating ‘we have one flawed candidate left to beat…It’s going to be the beginning of a new adventure.’

Whilst the Clinton camp are cautiously confident for a victory, the Trump camp are hoping for a Brexit like surge for Trump. Both candidates are conducting a race to the bottom to win votes in a brutal election. It will likely come down to voter turnout, and it really is the case that the apathy of millennial voters could be the ecstasy needed for a Donald Trump victory. After a bitter race, it is now the people not the politicians who have their chance to speak.

An open letter to Donald Trump from some angry women, https://driftingthrough.com/2016/10/06/an-open-letter-to-donald-trump-from-some-angry-women/?blogsub=confirmed#blog_subscription-2.

The Guardian., ‘I don’t like this election’: will millennials, the biggest generation, turn out to vote? https://www.theguardian.com/us-news/2016/sep/27/millennials-voters-turnout-2016-candidates-reno-nevada